The state of New York. You can’t possibly attempt to summarize the entire state in a couple of paragraphs. Except we can tell you, the people there are fiercely protective of where they live. And, like most other people in the northeast, they’d most likely you stay out. Even when you’re on vacation.

If you’ve ever been to the state of New York (besides NYC), you’d know why it’s a gem. If you haven’t been, and actually venture out beyond the confines of downtown, you’d see it’s one of the most beautiful places in the country.

But is it all good in The Empire State? Of course not. Just like every other state, New York has its least desirable spots. The purpose of this post is to use science and data to determine which cities are the worst you could possibly live in if you make New York your home.

After analyzing 163 of the state’s most populous cities (over 5,000 people), we came up with this list as the 10 worst places to live in the state of New York:

However, according to data (which doesn’t measure things like beauty and ‘friendly people’), there are far better options in the state for making a place home. And the worst place to live in New York? That would be Monticello.

The famous Monticello is in Virginia and represents Thomas Jefferson’s former home. This Monticello has much less going for it. In fact, it stands as the number 1 worst town in all of New York.

A bad economy explains why Monticello is such a drag for its 6,433 residents. The median income is only $31,723. With so little cash coming in, it’s no wonder that the poverty rate sits at 27.8%. Weak schools and safety concerns also present challenges.

Still, there are things to do in this southern New York town. For instance, you can check out harness racing at the Monticello Gaming and Raceway. Or, for more gambling action, head to the nearby casino, Resorts World Catskills.

Rochester is home of a culinary delicacy known as a garbage plate. Turns out, that dish provides a good metaphor for the town’s economic situation, making it the number 2 least appealing spot in New York.

The 206,848 residents of Rochester struggle with major economic issues. The unemployment rate comes in at 10.2%, with 31.3% of people making due below the poverty line. Safety is a major problem in the area as well, with a crime rate more than 70% above the national average.

The city has some bright spots. It borders Lake Ontario, providing access to beaches. It also contains the George Eastman Museum, one of the great collections of photography in the world. Lockport gets its names from the locks of the Erie Canal. When that waterway was completed in the 1820s, Lockport became an instant boom town. The good times haven’t lasted into the 21st century, however. Nowadays, the community represents the number 3 most miserable place in New York to call home.

The economy in the area is less than robust. The median income hovers at $45,018 and the unemployment rate stands at 6.0%. Lockport has a few top-flight schools, but most score a 6/10 or worse on Great Schools.

There are perks to life in Lockport. The Erie Canal still runs through town, creating a scenic waterway. You can also check out the Lockport Caves.

Located along the Hudson river in the southern part of the state, Newburgh has a scenic view and many historical connections. Presidential buffs can visit Washington’s Headquarters, among other preserved buildings from the past.

Unfortunately, in the present, life in Newburgh offers many challenges. High crime, an expensive cost of living, and a weak economy make the community one of the most dreadful places in New York.

The crime rate stands nearly 40% above the national average. The mean income reaches $41,769, not enough for the region’s high cost of living. As a result, 25.4% of people live below the poverty line. Education is spotty as well, with even the best schools only ranking a 6/10 on Great Schools. If you live in Utica, you’re either going to come to the defense of your city and tell us that we’re idiots, or you secretly hoped you wouldn’t see your city mentioned here. The fact is, Utica isn’t necessarily a very desirable place to live, no matter how you look at it. And you probably know it.

Poughkeepsie is built on the shores of the Hudson River, about 2 hours north of New York City. Often referred to “Queen City of the Hudson,” the town’s 30,381 residents hardly pursue a royal lifestyle. In fact, the community ranks as the number 6 most terrible place to put down roots in New York.

There are benefits to life in Poughkeepsie. For instance, you can take the scenic Walkway over the Hudson. It also serves as a vibrant college town, home of the famed Vassar College.

Binghamton used to serve as a crucial hub in the south-central part of New York. It’s location at the intersection of the Susquehanna and Chenango rivers, plus the presence of key railroad lines, made it an economic centerpiece. Unfortunately, the world has moved on. These days, Binghamton serves as the number 7 least appealing location in New York.

In the 21st century, the community faces significant economic woes. The unemployment rate sits at a whopping 10.4% and the median income hovers at $34,487. As a result, 32.6% of Binghamton’s 45,140 residents need to struggle in poverty. Crime is also a concern in town, with a crime rate more than double the national average.

You can find bright spots in town, of course. Check out the scenic areas near the rivers, or head over to the Bundy Museum of History and Art or the Roberson Museum and Science Center. Endicott began life as a company town. It was created for the Endicott Johnson Corporation, a major shoe manufacturer during the early part of the 20th century. Those jobs are long gone at this point. Now, a stagnant economy makes Endicott one of the worst place in New York to put down roots.

Finding a job represents a difficult chore for the 12,771 inhabitants of the area. The unemployment rate sits at a dreary 8.6%. The median income comes in at $41,339.

There is upside to living in Endicott. Built along the Susquehanna River in south-central New York, the community offers plenty of waterside parks. If you want to know more about old-time Endicott, you can head over to the Endicott History and Heritage Center. 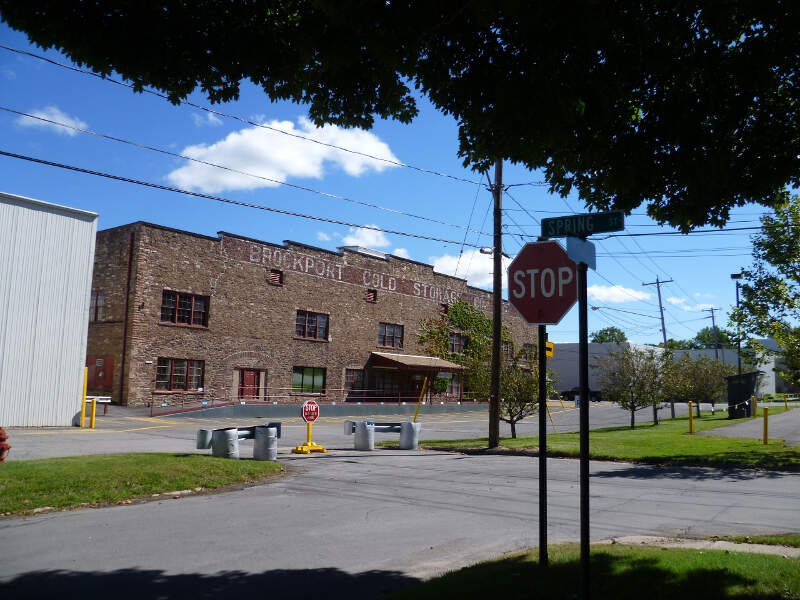 Brockport has an official nickname: “The Victorian Village on the Erie Canal.” It gets this title from its proximity to the canal and a beautification process that includes a brick walkway. Too bad the rest of the town isn’t quite that nice.

A weak economy makes Brockport one of the least inviting places in New York. The 8,292 residents have to suffer with a 8.8% unemployment rate and a 25.7% poverty rate. The median income comes in at $40,083.

It’s a shame because other aspects of the town are quite pleasant. Many of the schools are decent and the cost of living is low. And, of course, you’ve got those lovely canal walks, plus a short drive to Lake Ontario, about 20 minutes north.

On the surface, Syracuse has a lot going for it. It houses the famed Syracuse University. History buffs can check out the Erie Canal museum, one of many such learning institutions in town. And you’ve got a lovely lakefront along Onondage Lake.

But all this comes with a dark side. High crime and a depressed economy make the community one of the worst places to reside in all of New York.

Just look at the crime rate: it runs about 50% above the national average. This doesn’t come as a surprise, given the economic conditions. The town of 142,874 people has to deal with an unemployment rate of 9.3%. The median income sits at $38,276.

Safest Places In New York According To Science

Furthermore, only cities with at least 5,000 people were considered — leaving 163 cities.

We then ranked each city from 1 to 163 for all the criteria with a #1 ranking being the worst for the particular criteria.

Finally, we ranked every city on the “Worst Place To Live Score” with the lowest score being the worst city in New York — Monticello. Read on for a detailed look at the 10 worst cities in New York. You can download the data here.

Wrapping Up The Worst In New York

If you’re looking at areas in New York with the worst economic situations, where there’s higher than average crime, and not a lot to do, this is an accurate list.

And in the end, Monticello ranks as the worst city to live in New York for 2021.

If you’re curious enough, here are the best cities to live in New York:

Where Are The Worst Places To Live In New York?

Editor’s Note: This article is an opinion based on facts and is meant as infotainment. Don’t freak out we updated this article for 2021. This is our seventh time ranking the worst places to live in New York.
Share on Facebook