Songs, movies and pop culture in general have talked about Oklahoma forever now. It’s got a lot of history, beauty, culture and some of the friendliest sports fanatics in the country. If you grew up there, you’ll most likely never leave.

But is it all good in the Sooner State? Of course not. Just like every other state, Oklahoma has its least desirable spots. The purpose of this post is to use science and data to determine which cities are the worst you could possibly live in if you make Oklahoma your home .

After analyzing 68 of the state’s most populous cities (over 2,5,000 people), we came up with this list as the 10 worst places to live in Oklahoma:

However, according to data (which doesn’t measure things like beauty and ‘friendly people’), there are far better options in the state for making a place home. And the worst place to live in Oklahoma? That would be Idabel.

Speaking of a long drive for some indoor entertainment, people in Idabel would have to drive all the way down to Texarkana to find a decent-sized town. If they could afford it. The average family in Idabel lives right at the poverty line, and 7.5% of them are unemployed, which is the 14th highest in the state.

Crime is certainly above the state average here.

But on the bright side, the education, measured in terms of money spent per student and teacher-student ratio, is towards the top.

If you drive a half hour south of Tulsa on Route 75, you’ll come to Okmulgee, which has the 2nd highest unemployment rate in the state of Oklahoma. At 11.1%, a lot of folks are having a hard time finding jobs here, and those that do earn some of the lowest salaries in the state.

The crime rate is the 6th highest in the state, where people have to lock their doors at night, considering that 1 in 21.0 was statistically vulnerable to a property crime in 2021. 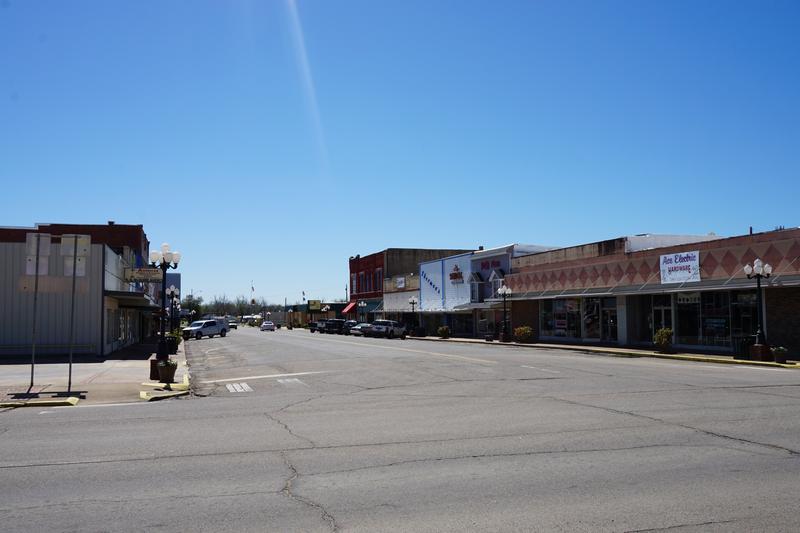 Located in the southern part of the state, a short drive from the Texas border, Hugo was named after novelist Victor Hugo. That’s right: the Les Miserable guy. Strike you as a weird reference for a small town in Oklahoma? Well, the connection will seem appropriate once you hear some of the economic stats about this place.

Like Les Mis, Hugo has beauty mixed in with the suffering. For instance, check out the Frisco Depot Museum or Hugo Lake State Park. Way out near the Arkansas state line is Poteau, where there simply isn’t much to do, entertainment wise. You have a long way to drive to get to any decent sized city.

But that’s not all. The unemployment rate is at 4.1%, which is the 48th highest in the state. And the income levels are far below the state average. So, even if residents here had a ‘big city’ to venture into every now and then, many couldn’t afford to make the trip. Sallisaw sits in the eastern part of the state, about a half hour from Fort Smith, Arkansas. More than anything else, rampant poverty lands this community of 8,571 residents on this list. The poverty rate in town runs nearly 30%, with unemployment hovering at 7.7%.

Housing and safety are also concerns. The town’s crime rate comes in at 30% above the national average.

Sallisaw has its benefits. Located near the Arkansas River, it provides excellent access to outdoor activity. Residents can also head to Sequoyah National Wildlife Refuge. NFL legend Troy Aikman went to high school in Henryetta. Presumably, he doesn’t spend much time there these days. Sadly, his old home town now sits at number 6 on the list of Oklahoma’s worst places to live.

Henryetta drew settlers in the 1800s with rich coal deposits. These days, though, it’s hard to make a living in town. The unemployment rate tops 10% and 23.0% of locals struggle below the poverty line.

Despite these problems, Henryetta offers many features. Besides high school football, the town has Henryetta Nichols Park nearby, as well as the Henryetta Territorial Museum.

Pauls Valley stands along I-35, about an hour south of Oklahoma City. The 6,139 residents generally work in agriculture or in the oil business. Unlike many of the towns on this list, the local economy actually hums along quite nicely. The unemployment stands at 3.5% and the median income hangs at $40,897.

So, if jobs are relatively easy to find, what’s the problem? Well, safety for one thing. The crime rate in Pauls Valley runs 150% above the U.S. standard. Housing and education are issues as well.

Looking for something to do in town? Head over to the Toy & Action Figure Museum. Or, if you want some more grown up, the Jet Stream Casino is around as well.

When you’re looking at science and data, Seminole is the 8th worst place you can live in Oklahoma. Let’s see why.

The unemployment rate in Seminole is 9.7%. In terms of comparing Oklahoma cities to one another, that’s the 5th highest in the state.

And while a lot of folks in Seminole are out of work, the ones who have jobs earn $37,120 a year, which doesn’t leave a lot of wiggle room. And the crime in Seminole is the 30th highest in the state, where 1 in 34.9 people have a chance of being the victim of a property crime, according to the latest FBI numbers. That’s really high.

Plus, it’s one of the least densely populated places in the state, where you have to drive an hour to Oklahoma City to find anything beyond the norm for fun. Sure, Oklahomans enjoy their ‘outdoor’ fun, but when you want to mix in a fancy night out or hit the malls, that’s a long drive.

Seminole folks could use a big hug right about now.

Situated about 40 minutes east of Oklahoma City, Shawnee has a reputation as a cultural center in its region. It features a gorgeous former railroad depot, since turned into the Pottawatomie County Museum. In addition, residents can be proud of the Mabee-Gerrer Museum of Art.

However, life in Shawnee has its troubling aspects as well. The area sports a sluggish economy, including a poverty rate of 20.5% and a median income of $40,473. The town also deals with unimpressive schools and a crime rate more than double the national average.

Purcell is known for its horses. In fact, the town’s equestrian prowess has earned it the label “Quarterhorse Capital of the World.” Well, Purcell might be a great place to grow up if you’re a horse. If you’re a person, however, you might have a different opinion.

A stagnant economy, an elevated crime rate, and a spotty school system make the town one of the worst places to live in Oklahoma. Purcell’s unemployment rate runs 6.6%, while its poverty rate comes in at 15.3%. The median income hovers at $53,155. Meanwhile, the crime rate tracks at 50% above the national average.

Best Cities For Singles In Oklahoma

Furthermore, only cities with at least 5,000 people were considered — leaving 68 cities.

We then ranked each city from 1 to 68 for all the criteria with a #1 ranking being the worst for the particular criteria.

Finally, we ranked every city on the “Worst Place To Live Score” with the lowest score being the worst city in Oklahoma — Idabel. Read on for a detailed look at the 10 worst cities in Oklahoma. You can download the data here.

Wrapping Up The Worst In Oklahoma

If you’re looking at areas in Oklahoma with the worst economic situations, where there’s higher than average crime, and not a lot to do, this is an accurate list.

And in the end, Idabel ranks as the worst city to live in Oklahoma for 2021.

If you’re curious enough, here are the best cities to live in Oklahoma:

Where Are The Worst Places To Live In Oklahoma?

Editor’s Note: This article is an opinion based on facts and is meant as infotainment. Don’t freak out we updated this article for 2021. This is our seventh time ranking the worst places to live in Oklahoma.
Share on Facebook